I can acknowledge that people have feelings.

But I’m entitled to get upset when people’s feelings cross MY LINE!!!!!

It is no secret that my name is Vernon J.

If someone feels that they need a last name I tell them Joseph.

As it is MY NAME, that’s my choice.

If you don’t feel this why that’s too bad. Especially when you’ve been told the entire story.

Oh, that was an interesting development last night.

Ask me about it, I’m not ready to share on my blog.

Today is Tuesday the 21st day of October in the 36th year of Vernon J.

The second of the day – Natasha Bedingfield – I Wanna Have Your Babies: http://youtu.be/eHX-FE41c-o. Apparently this song isn’t available in my country via Google play music. Oh, Well! Is a good song.

The word of the day is realpolitik which is political realism or practical politics.

You never know how your week is going to go. My plans changed for today after I got home last night.

What do you have Anakin?

So an Omaha Police Officer decided that he or she was too good to wait for the light to change. Turned on their light bar to just go though the light. A real shame & disrespectful to me & the other lawbiding citizens.

Have a good day folks.

Apparently tomorrow is ‘Bosses Day’. I was asked what I’m getting my ‘boss’.

I don’t say it with such grace.

How about t shirts that say “Vote No On School Levy”.

Sometimes you get me fired up people on the other side of the aisle. Kinda like the Brooks Elementary School in Newnan, GA. Click this link here

Cupcakes or ‘food treats’ might be unfair. Like the article says, what kinda treat are they suppose to bring in? Cause I’d like to know this. I respect the allergies, but I have ‘dietary’ restrictions. When I go to a BBQ, I usually bring my own side dish & bratwurst, cause ain’t nobody got time for burger’s or beef products.

Had a fun night out & took care of business downtown. Nothing amazing happened, but you live & learn. Maybe you don’t learn & doing the same bad choices you have been doing for the last 3 years.

The word of the day is equanimity which is mental or emotional stability or composure; calmness.

What are you looking forward to this week? 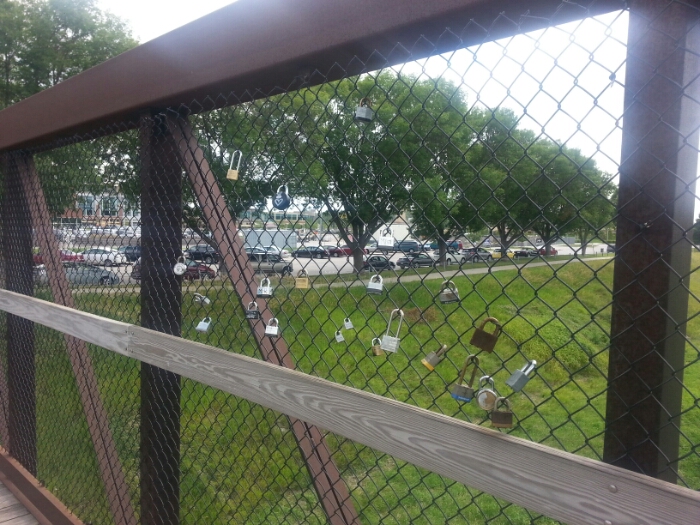 A. STOP IT
B. I reported it to the city.
C. If you really must express ‘your love’ on a fence or bridge. Build it yourself than attach a lock.

Yesterday was a nice day, this feels good so far.

It was a perfect day.

Today is Wednesday the 16th Day of July of my 36th year.& we are halfway though the month.

If you’re interested in someone you need to take your time with her, you can’t just tell her in your first ever Meet up that you want to date her. You need to build chemistry first or it never works out in the long run. Don’t make yourself seem easy, don’t throw yourself at her unless you want to be in a one-sided relationship Where you won’t be given any respect. Let the love and chemistry grow, you’ll know when the time is right For you to ask her out and it’ll be perfect. More ‘things you should never tell a woman‘

I’m calling Bullocks. You have to let her know where you stand, otherwise you wind up in the Friend zone. Maybe that’s where you’ll wind up eventually, but you don’t want to start there. I can see not saying I Love You right away. BUT THERE is nothing wrong with saying I like you & I want to date you

The word of the day is writhen which is twisted.

Check out Walk Away. Not a County Song, but a good story

Even though I have a mandatory meeting, that was voluntary & I had no intention of going to at that time. BUT The rules are THE rules. You know how I feel about them.

Bocce Buddies didn’t win yesterday, but there was a fun time had. That’s what is important.

So this is the first time I’m mentioning this. The IRS had finally taken taxes or of my PT job paycheck. I’ve grossed $375 & some change, they took $11 & some change. I dunt know what the percentage is, but I can tell you or isn’t the same. All things being the same. They have no clue what they are doing.

What are you doing today?

I got to ride my bike twice yesterday. I’m thinking I’ll get to ride again Friday. I’ll keep you posted.

Never thought I’d have to ask for more taxes to be taken.

Good Morning & Where you’re going; I want to go too.

The Federal Government isn’t taking enough out of my PT job paychecks. This is a problem

Today is Thursday the 3rd day of July in my 36th year.

Does anyone work a PT job in addition to their FT job. I’ve got some questions. Send me an e-mail Vernon-J@Vernon-J.com if you do. Happy FNP‬!

Wednesday was fun for Team #VernonJ. Today will be better. Everyday is better causer I know more today than yesterday.

The word of the day is estivate which is to spend the summer at a specific place or in a certain activity.

I’ve got my 6ix hours at work today. Then I’ve got about the same amount of time before I go back to work.

I was super excited & thought today was Friday. It isn’t I’ve conferred with no one. I’m smart enough to correct myself.

Everyone should be cool like Regan & stop by for a drink.

Have a great DAY!

Apparently CNN found the video of the questionable behavior of a couple individuals.

Today we are doing the B-Smile, Smile and encourage other people to smile. You can call it the Bump & Smile if you want.

So I won’t post the video because it is a terrible video & I’m ending the cycle. The video is a young minor who is swearing & be swore at by people who are adults. NOW CNN uses the term racist in their description. NOW the video was filmed by someone, the Omaha Police Officers Association didn’t use any names when the video was posted. They said they were posting it to try to help end the cycle of ‘thug life’; in addition they also called Child Protective Service. There was no crime committed in the video according to them.

I’m not sure what more the police could’ve done to raise awareness of this issue. I’m not sure how this is racist in any means. BUT if a video containing a single individual of a race is racist. Then I’ve filmed alot of racist videos, I also guess self photos would be considered racist. If you are reading this and you ever took a picture of yourself, you just became a racist. Good JOB.

I am quite shocked that the media is trying to say it is racist and putting the screws to the Omaha POA. I didn’t see one of the local stations report on the video until it became racist and ‘controversial’. Good Job there local stations.

The word of the day is welkin which is the sky; the vault of heaven.

Well the day got interesting after this.

I locked myself out when moving the bike. Neighbor roommate literally ignores my calls for help. I was 90 mins late for work.

Work was fantastic the AT’s for David had a meeting.

I came to my other job. Had a meeting, work. Going home in nine minutes.

Do that’s two good days in a row.

So now a racist act is now as Sarcasm?

Good Morning & Happy Saturday. Today is the 9th of November in the 35th year of Vernon J.

So I commented on this picture Dear americans, is this accurate? – Imgur, my user name is VJ68131. Vernon J 68131 incase you are wondering what that stands for. So the guy responds with this.

Apparently the problem is that my sarcasm isn’t working. NOT the fact that you said a racist comment. I’m still not calling him racist, because I don’t know him. You shouldn’t defend your racist comments with humor. It was racist, deal with it.

Here’s to just accepting responsibility for what you do & say.

The word of the day is en bloc which is as a whole.

I told two people that Thor: The Dark World was good. This was before I saw it. There was good laughs & serious parts. I’d smash a couple aliens with a Mini for you. If you were on the fence about seeing this movie, why? Also go see it. This isn’t a review of the movie, cause you shouldn’t read my reviews or anybody else’s.

So what’s going on today?